29.  Lo! I would rather thou shouldst bear the punishment of the sin against me and thine own sin and become one of the owners of the Fire. And that is the reward of evildoers.              28.  La-‘im-  basatta  ‘ilayya  yadaka  litaq-tulanii  maaa  ‘ana  bi-baasitiny-yadiya  ‘ilayka  li-‘aqtulak.  ‘Inniii  ‘akhaa-fUllaaha  Rabbal-‘Aalamiin. 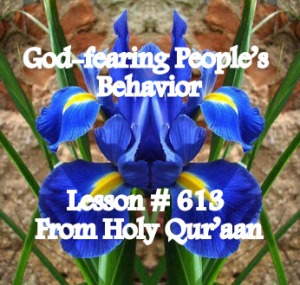 Basatta – (you stretch), it is from basat, which means “to spread, to stretch, to lengthen”. Baasit has been derived too from the same word, which means “Given of the prosperity, one of the attributes of Allaah Almighty”. Tabuuu-‘a – (you bear, you get), it is from buu-‘un, which means “to return”. This word has come in Surah ‘Al-Baqarah and the aim of it is “when you finish your work, then there should be load of two sins upon you, 1. Load of that sin, what will be done by you. 2. The load of the sin of my murder”

Abel said to the Cain after it, “If you will stretch out your hand against me to kill me, then it will be your own apprehension. I shall never stretch out my hand with the intention to kill you. Because I fear Allaah Almighty, and I know that He is the Lord of the Worlds, and all the works are managed by His support. I will never wish to displease Him because I fear Him. I have intended neither to shake any part of my body in defense and nor say such a word due to which you become angry upon me, and you kill me in anger. Doing so, some portion of the sin will return to me also. I want to have patience and in such this manner, you should lift the load of my sins as well as your own sins and bear the punishment of the sins against me and yours own. Its result will be that you will become one of the owners of the Fire because that is the reward of evildoers.

Abel said all this for the purpose that perhaps Cain would abstain from the sin by hearing this entire, “I will never contend with you and the load of entire sin will be on your body, and you will be included in the evildoers”. But Cain had become thoughtless due to his wishes. He listened nothing.