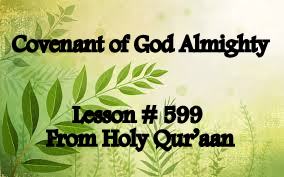 Waasaqakum – (obtained your promise, got your acceptance), this word is from mu-wasqah, which means ‘to promise, to make terms, to covenant’. ‘As-suduur – (breasts), it is plural of sadar, which means ‘breast, heart’. Zaatis-suduur – (those thoughts, which are in the hearts).

The Muslims were informed in the previous verses that all good things have been made lawful for them. Then it was described to them that Their Religion has been perfected Today and Allaah Almighty has completed His Favor upon them, and has chosen for them AL-ISLAM as Religion. Then they were ordered that they should clean themselves for worship, and ablution and bathing were prescribed for them before the prayer. Then they were relaxed in case of sickness and journey and determined method of Tayammum for their pureness. These all favors are due to Grace of Allaah Almighty. Remember them every time.

This is the word, which is reminded to the Muslims off and on, whenever any such situation comes. Either it is said directly to them that they have many favors of Allaah Almighty, or it is described about other people that they promised Allaah Almighty many terms, but did not fulfill. Now, you should fulfill them. Object to say the Muslims in this verse is that they should not be like the Jews and the Christians, but they should fulfill their responsibilities, which are liable to come upon them by Islam.

Stipulation of pardon is upon fulfilling of this covenant, “We hear and we obey”. Keep your duty to Allaah Almighty and understand carefully that He knows very well about all that, what is hidden in your breasts. You can hide nothing from Him and He will give you retaliation – reward for good deeds and punishment for bad deeds.

God Does not Wish to Place a Burden on You

Wam-sahuu – (and rub lightly), it is from masah, which means ‘to touch anything with hand, to caress hand on something’.

‘Al-ka’-bayn – (the ankles), it is plural of ka’-b, Ka’-b means a thing, which is risen or grown and seems separate from its surrounding. Here it aims ‘the excited parts of the foot from both sides, which are called ankles’.

Junuban – (unclean), it is from janaabat, which means ‘such condition of the body, when taking a bath becomes incumbent’.

Gaaa-‘iti – (the closet, the descent place), usually human being goes to the privy at any abyss or deep place. Therefore, gaaa-‘iti means a latrine.
Laamas-tum – it is from laamsah, which has been derived from lamas. It means ‘to touch, to meddle with someone’. Here it aims “to copulate”.

The Muslims were ordered in the beginning of this chapter (Surah) that they should fulfill all the duties and obey the commands of Allaah Almighty. Then it was told that all good things have been made lawful for them. They can use them pleasantly. Likewise, they should marry the women and enjoy the pleasures of the world, remaining in the prescribed limits of Allaah Almighty. But they were warned at the end that remaining entangled every time in the pleasures of the world, drives away the humankind from the spiritual pleasures and makes the light of Belief foggy. Therefore, they should keep the prayer up, presenting themselves in the court of Allaah Almighty, at prescribed times, so that their faith may remain fresh and they may be saved from the loss in the Hereafter.

But the lawful pleasures too do not spare the human being to be able even to be present in the prayer straight forward. Therefore, before offering the prayer, they should purify themselves. If there is no need to take a bath, then they can do ablution only. That is to say; they should wash their hands first  including wrist, then rinse the mouth and clean the teeth thoroughly, after that ;clean the nose and pour the water into it, then wash entire face with water and both arms up to elbows, and rub their head lightly as turning over their hands duly freshly wetted, and at the end wash their feet up to the ankles.

Then it has been described that if bathing is incumbent, then only ablution is not sufficient for prayer at that time. But it is compulsory to wash entire body thoroughly with water. Three acts are necessary while taking bath:

As it has been discussed earlier that, ablution is mandatory before offering the prayer, but use of water harms often to the sick, and sometime it cannot be availed during journey and that, which is available, is necessary to be kept for drinking purpose. In such conditions, if the time of any prayer begins, then what should we do? In this verse, it has been clarified that in such situation, you should do Tayammum.

After intending to acquire pureness, palms of both hands should be spread and kept on pure earth. Then arise both hands and turn them over the face fully. Put both hands again on the earth and after arising them, left hand palm should be turned over the right hand from fingers up to elbow, and palm of right hand – on the left hand from fingers to elbow thoroughly. That’s all, the Tayammum has been completed and now you can worship and offer prayer.

Due to eating and drinking, a human being needs to go to closet (latrine) and sometimes gas etc. exhausts from its stomach. These are called little impureness. Ablution is necessary in these conditions. Then ablution is broken when either anyone cause of the above happens or some blood flows from any part of the body or someone has slept for a while. Besides this, there is another big impureness, for which ablution is not sufficient to be pure, but bathing becomes incumbent. If there is need of ablution and taking bath (both), but use of water is impossible, then Tayammum is sufficient for the both.

Allaah Almighty has not placed any burden in the religion for us, but He has eased for every trouble. So thank Him and obey His orders.