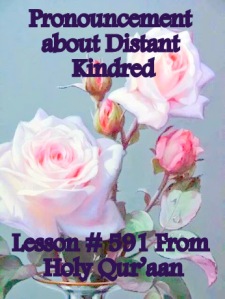 Kalaalah – (infirm and feeble), here this verse signifies towards a person, who has only brothers and sisters, and does not have either father or children.

Tazilluu – (you err), this word has been derived from the word zalaalat, which means ‘error’, but there is such a situation in this composition that the people, who know Arabic language, understand the word “no” or “not” with it. Therefore it means “Do not err” or “You err not”.

Allaah Almighty expounds that if there is no heir of the dead person, other than brother and sister, then the hereditary will be given to them as explained:

Allaah Almighty pronounces these points so that you may be saved from error and be not confused at the time of distress.