A Painful Doom for Scornful and the Proud 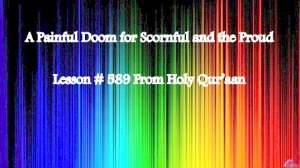 Fa-yu-waffiihim – (will pay them in full), root of this word is ‘waf-yun’ and origin is “’iifaa”, and the word wafaa is also from it. It means “to pay in full, to return in original”.

‘Ajrun – (Reward, retaliation), in Arabic language, usually this word is used for both purposes i.e. as good and bad retaliation. However, here it has come in the meanings of ‘good retaliation’ (reward).

‘As-takbaruu – (were proud), this word has been derived from kabar, ‘istakbaar. Takabbar is used for self-praise, showing superiority and ostentation. That is to say; to consider and disclose oneself more than actually it is.

Waliy-yun – (protecting friend), walaa-yat and tawallii are also from the same origin. Its plural is ‘Awli-yaaa’, which means ‘friends, companions’.

After telling about religious false tenets of the People of the Scripture and out of them particularly the Jews, now it is being commanded that worthy of rewards are only those people, whose belief and deeds are correct. As though, for the chaste and pure life, purity of thoughts and for the right fancies, soundness of the deeds are obligatory for each other.

These undefiled, sincere and internally innocent slaves of Allaah Almighty, who are called Believers, are entitled to get rewards in full and more Bounties from their Lord Almighty. But those persons, who feel scorn from these beauties and show superiority (who are proud), they will be involved in a very painful doom. There will be neither any protecting friend, nor helper and nor any companion for them.