Belief in God and His Messengers 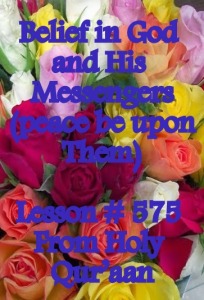 It has been described in this verse that only those persons are rightful to be called believers who believe in Allaah Almighty and His entire Messengers (peace be upon them). For them there are very grand and noble future rewards. The promises which have been mentioned in the Holy Qur’aan for them, those all will be kept. The mercy and forgiveness of Allaah Almighty is ready every time for them. In the Day of Resurrection, complete rest and unlimited comfort will be attainable by them.

It is very clear from this verse that Allaah Almighty has sent His Messengers in every nation and every reign for the guidance of human beings. Every nation is required to believe in the Messenger of her era and all Messengers prior to Him (peace be upon them), it is incumbent and necessary for all nations. Muhammad (grace, glory, blessings and peace be upon him) is the Messenger for the present time. It is impossible to escape without believing in Him (grace, glory, blessings and peace be upon him).