How to Amend the Affairs 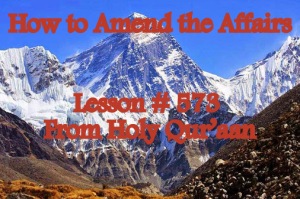 Jahra – (to utter loudly, to disclose)

Tubduu – (do openly), it is from ‘abdaaa’, which means ‘doing some work openly, manifest’.

Tukh-fuuhu – (keep it secret), it is from ‘akhfaa, which means ‘secrecy, concealment’.

Ta’-fuu – (Forgive it), it is from ‘ufuu. Ma-‘aaf and ma-‘aafii all are from the same origin, which means ‘to forgive, to pardon, to excuse’. ‘Afuw-wun is also from it, which means ‘Forgiving, who excuses’.

‘Al-jahra  bissuuu-‘i  minal-qawli – (to utter the harsh speech), to describe the badness of anyone openly before the people or to say such a thing about any person, which is a scandal, an infamy for him/her.

Allaah Almighty has manifested very clearly this reality that He does not like to disclose the badness of any mankind. It is evident that here it does not mean that this description is about ‘false accusation or calumny, but it aims only ‘badness’, proclamation of which has been forbidden. There is possibility of spreading the badness additionally due to its disclosure and public exposure. If we shall mention the badness of any person in his/her absence, that will be backbiting, detraction. If we shall say in front of that person, that will become cause of cruelty. Only the tyrannized person has right that he/she can speak against the tyrant and proclaim about his evils and badness.

As far as about the goodness, there is choice, either you may hide or disclose it, because due to its disclosure, you will persuade others for goodness and due to its concealment, hypocrisy/pretense will not born into you. At the end, it is commanded that if you forgive the badness, that is better. Allaah Almighty has Power over entire affairs Himself and is Forgiving. If He forgives, in spite of being Powerful, then why do you not do so?