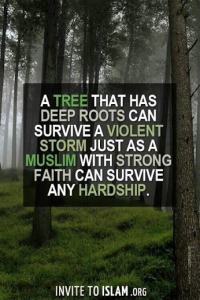 Tahkuma – (You may judge), it has made from hakama, which means ‘to settle, to decide, to make a judicial decision, to command about something’.

‘Araaka – (you are caused to know or understand, you are shown), this word has been made from ‘araaa-‘ata, which has come out from rawayta. It means to observe, to see, and ‘araaa-‘ata means ‘to show and to cause to understand’. Here it has been used in these meanings.

Khasiimun – (pleader), it means ‘to plead for any person or against any person’, that is to say; ‘to try to adjudge any person criminal’.

Usually this bad habit is found in the persons, who are weak in their belief that they try to change the people’s view about that crime which they have committed personally and say that it was committed by so and so person, to save themselves from the punishment, so that they may be let off and the other may be trapped. During the reign of the Messenger of Allaah Almighty (grace, glory, blessings and peace be upon Him), there was such a Muslim, who made hole through a wall of any person, stole a bag filled with flour and some weapons from his house and brought to own home. Accidentally the bag was torn. The flour fell in the entire way constantly. He thought, “If I will keep it in my house, I will be caught”. At night he entrusted both things with a Jew. When the light grew in the morning, the owner of flour and weapons reached his house by tracing out of the flour, which was fallen in the way. But the both things were not held in his house. He came out and observed that the line of fallen flour was going ahead. In short, he reached the house of the Jew. He arrested the Jew, when he saw his items at his home. The Jew said, “These things have been left with me by so and so person in trust. I have not stolen them”. The thief and his family told that the Jew was a thief.

It has been commanded in the verse, “We have revealed unto you the Scripture (Holy Qur’an) with the Truth, so that you may judge correctly in Its light between the mankind by the Guidance which Allaah Almighty has shown you. Whether the quarrelsome are good or bad, whether they are believers or infidels, you should settle the true as a true and the liar as a liar, and decide with justice without favoritism. Since there was a fear of partiality, so you should seek forgiveness of Allaah Almighty, He is Ever-Forgiving, Merciful.