Philosophy In Change Of Qiblah

Li-na’-lama – (that We might know) the word ilm (knowledge) is used here only for distinction, identification and recognition.

It was the blessed habit of the Messenger of God Almighty (may glory, grace, blessings and peace be upon Him) that in which matter there was no instruction from the God Almighty, in that matter He (may glory, grace, blessings and peace be upon Him) used to choose the manner of former Prophets (peace be upon Them), for instance the pray had become duty to offer, but there was no clear order available regarding Qiblah. The Messenger of Allah Almighty used to offer prayers turning towards the Temple of Jerusalem, which was the Qiblah of the children of Israel. It has also known clearly from the words of this verse ‘Wa maa ja-‘alnaa’ that in the beginning to face towards the former Qiblah was with the sanction of God Almighty. When He (may glory, grace, blessings and peace be upon Him) migrated from Makkah to Madina, even then the Temple of Jerusalem (bayt ul Maqaddas) also remained Qiblah. But after a period of nearly sixteen months the God Almighty ordered to change the Qiblah and the Ka’-ba was appointed as Qiblah of the Muslims.

The God Almighty commands in this verse, “It was the purpose to keep the Qiblah to Bayt ul Muqaddas (the Temple of Jerusalem) temporarily for a short time so that the Obedient and the Violent may be separated”.

If the Temple of Makkah were Qiblah instead of the Temple of Jerusalem (Bayt ul Muqaddas) during the life in Makkah then perhaps the people of Makkah might consider it as a kind of flattery and they might embrace Islam due to their own country’s Qiblah instead of taking this religion as the Order of God Almighty. Thus Islam is pure from all these objects. Teaching of the religion is not for favor of any particular nation or race. Islam has come for the entire world and its teachings are for the entire nations. 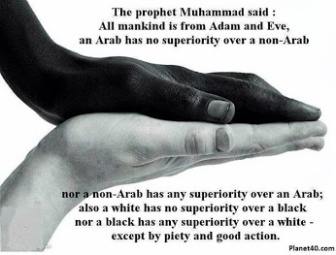